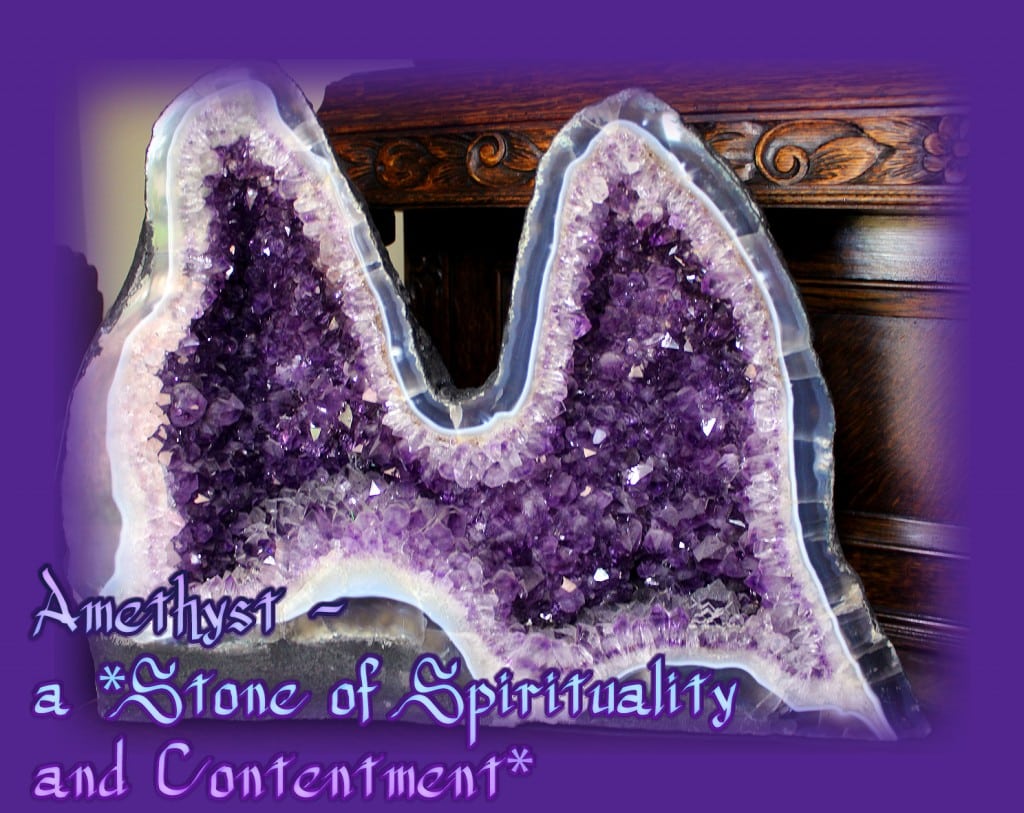 AMETHYST – a Stone of Spirituality & Contentment

Amethyst is a *Stone of Spirituality and Contentment*.  It facilitates transmutation of lower energies into higher frequencies of both the spiritual and the ethereal levels.  It is the representative of the principles of complete metamorphosis.

Amethyst balances the energies of the intellectual, emotional and physical bodies, and provides a clear connection between the Earth plane and the other planes of existence.  It clears the aura and stabilises and transmutes any dysfunctional energy located within ones body.  Amethyst also bestows stability, strength, invigoration, and peace;  the peace being the perfect peace which was present prior to physical birth.

Amethyst is also a *stone of meditation*, being excellent in conducting the energy of calm and peacefulness to help one to both enter and maintain the state of meditation.  It opens and activates the Crown Chakra.
Amethyst may be used to protect against psychic attacks: the energy of the attack being transmitted to the universe after its transformation into positive, loving energy.

It is *warm and cuddly* as well as regal and ruling.  It brings one the energies of serenity and composure while inciting fairness in decisions and enhancement in the ability to manage any and all responsibilities.
It enhances cooperation and co-efficiency between ones mental, physical, and emotional bodies, between the physical and spiritual worlds, and during activities of this world.

Amethyst Crystal provides the *sense* of common sense and encourages flexibility in decisions.  It controls temperament by imparting a soothing, calming and tranquillising influence, while clearing away unproductive and unkind vibrations.  It is also said to help business affairs to prosper.
Amethyst assists the assimilation of new ideas;  by carrying, wearing or using amethyst, one can remember and apply the myriad of ways which can be used to overcome any crystallised/stuck areas within one’s physical form, intellectual activities, emotional attitudes and state of consciousness.

By directing love to the structure of the amethyst, the energy is increased by orders of magnitude and returned to the region in which the amethyst is located.
Consciously holding the amethyst allows one to activate the energy to produce re-alignment of the energy bodies, while providing for stimulus to rectify disassociation between the aspects of cause and effect.
It further allows for integration of cause and effect, providing insight into which portion of the actualised self requires remodelling in order to facilitate change toward the ultimate state of perfection.
It has, since historic times, been used to encourage and support sobriety.  It is an excellent stone for one who is attempting to find freedom from addictive personalities:  either one’s own or another’s.

Amethyst can be used in the treatment of hearing disorders, to both strengthen the skeletal system and reinforce ones posture, and to stimulate both the sympathetic nervous system and the endocrine glands to proper and precise performance.  It is quite useful in treatment of disorders of the nervous system, digestive tract, heart, stomach, skin and teeth. It can help cellular disorders to re-adjust and re-align in order to eliminate distressful conditions.
Amethyst can also be helpful in the treatment of insomnia, headaches, and arthritis.

Vibrates to the number 3

Amethyst is only one of several quartz varieties. Other varieties that form macroscopic (large enough to see) crystals are as follows:
* Citrine is a yellow to orange gemstone variety that is rare in nature but is often created by heating Amethyst.
* Milky Quartz is the cloudy white variety.
* Rock crystal is the clear variety that is also used as a gemstone.
* Rose quartz is a pink to reddish pink variety.
* Smoky quartz is the brown to grey variety.

Amethyst is the purple variety of quartz and is a popular gemstone. If it were not for its widespread availability, amethyst would be very expensive. The name ‘amethyst‘ comes from the Greek and means ‘not drunken‘. This was maybe due to a belief that amethyst would ward off the effects of alcohol, but most likely the Greeks were referring to the almost wine-like colour of some stones that they may have encountered. Its colour is unparalleled, and even other, more expensive purple gemstones are often compared to its colour and beauty. Although it must always be purple to be amethyst, it can and does have a wide range of purple shades.
Amethyst can occur as long prismatic crystals that have a six sided pyramid at either end or can form as druses that are crystalline crusts that only show the pointed terminations. As a mineral specimen, amethyst is popular for its colour and nice crystal shapes that produce a handsome, purple, sparkling cluster.

However, amethyst is not the same everywhere. Different localities can produce a unique amethyst to that particular region or even to that particular mine. Experts can often identify the source mine that a particular amethyst came from. The key to this is the specimen’s colour, shape of crystal, inclusions, associations and character of formation.

The following is a list of many of the more noteworthy localities and some of the attributes that characterise the amethyst found there.

Ural Mountains, Russia — a very clear and dark variety that is cut for fine expensive gemstones, natural uncut clusters are rarely on the market.

Vera Cruz, Mexico — very pale, clear, prismatic crystals that are sometimes double terminated and have grown on a light coloured host rock. Crystals are typically phantomed, having a clear quartz interior and an amethyst exterior. Some are sceptred and phantomed.

Guerrero, Mexico — dark, deep purple, prismatic crystals that radiate outward from a common attachment point. Often the crystals are phantomed opposite of Vera Cruz amethyst having a purple interior with a clear or white quartz exterior. These are some of the most valuable amethysts in the world.

Minas Gerais and Rio Grande do Sul, Bahaia, Brazil — crystals form in druzy crusts that line the inside of sometimes large volcanic rock pockets or ‘vugs‘. Some of the vugs form from trees that were engulfed in a lava flow millions of years ago and have since withered away. Other vugs are just gas bubbles in the lava. Some vugs can be quite large. The crystals that form are usually light to medium in colour and only coloured at the tops of the crystals. Most clusters form with grey, white and blue agate and have a green exterior on the vugs. Calcite sometimes is associated and inclusions of cacoxenite are common.

Maraba, Brazil — large crystals with unattractive surfaces that are of a pale to medium colour and often carved or cut into slices.

Thunder Bay, Canada — a distinct red hematite inclusion just below the surface of the crystals is unique to this locality. Clusters are druzy crusts that line the fissures formed in ancient metamorphic rocks.

Uruguay — crystals are dark to medium and form in druzy crusts that line the inside of volcanic vugs that have a grey or brown exterior. The crystals are usually coloured throughout, unlike the Brazilian crystals, and form with a multicoloured agate that often contains reds, yellows and oranges. Often amethyst- coated stalactites and other unusual formations occur inside these vugs.

Africa — crystals are usually large but not attractive. However, the interior colour and clarity are excellent and polished slices and carvings as well as many gemstones are prized and admired.

North Carolina, USA — Druzy clusters that have a bluish-violet tint.

Pennsylvania, USA — druzy clusters that filled fractures in metamorphic rocks. They are generally a brownish purple and patchy in colour.

Colorado, USA — druzy clusters form crusts inside of fissures in sandstone, often on top of a crust of green fluorite. Crystals are dark but rather small.

Italy — both Vera Cruz like crystals, although not as well defined, and large parallel growth clusters with good evenly distributed colour.