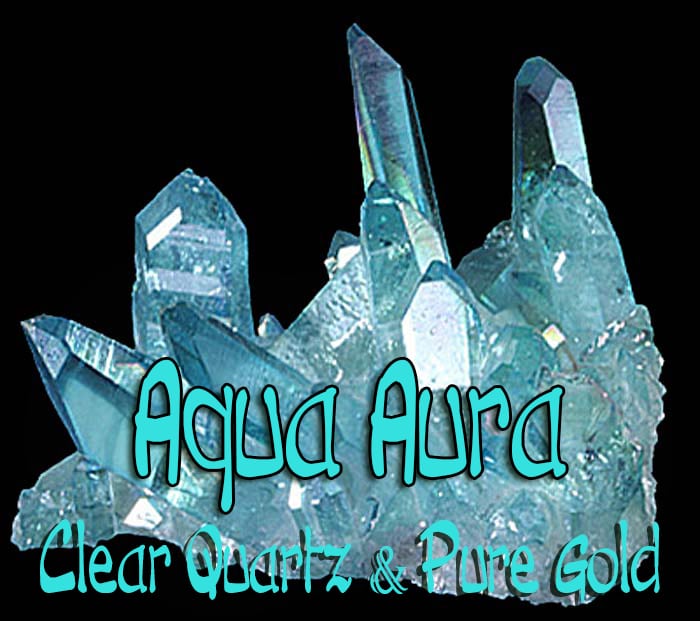 In a secret process which is part alchemy and part science, the two unique substances of quartz crystal and pure gold are intermingled in a permanent way, resulting in the striking blue colour of Aqua Aura ….. a colour similar to that of the finest  Aquamarine gems, but with an enhanced opalescence that flashes etheric shades of shimmering violet.  The process takes 12 hours to both heat the quartz to 1600 Fahrenheit while setting a vacuum equal to 2 earth atmospheres and letting chemically purified gold (purer than 24 Carat bullion) vapours into the chamber when the temperature and vacuum are correct.  This in turn bonds the gold to the lattice of the crystal forming a permanent bond that only strong acids or grinding can take off. This creates a beautiful blue like nothing else on Earth has.  During the process the heat is turned up one degree at a time.  At the end of the process, the heat is reduced again – one degree at a time.  This results in the beautiful blue not being able to be rubbed off.  Many people don’t like Aqua Aura as they say it us man-made.  This is not quite true because both quartz crystal and gold are both minerals and natural and it is only the process of bringing these two minerals together which is done by man.

The Lemurian Seed Crystals are often used for Aqua Aura.  These will be attracted to people who can actively assist in anchoring the energies that will aid the planet in these times. They have not yet been fully activated but are helping to set a strong foundation for the original blueprint of love flourishing throughout creation. As we grow in awareness of the primal unity of all things and open our hearts more, the Lemurian Seed Crystal transmission will permeate.
(By: Katrina Raphaell/Crystal Buzz Newsletter 2000)

Quartz is said to bring the energy of the stars into the soul.  Traditionally, the natural quartz crystal was said to both harmonise and align human energies – thoughts, consciousness, emotions – with the energies of the Universe and to make these greater energies available to humanity.  The natural tendency of quartz is for harmony, and it is recognised as a *Stone of Power*.

Geologically speaking, Lemurian seed crystals are an anomaly of nature.  They are found loose in sand banks not in clusters as quartz is customarily found.  These were collected at a mountain top location in Brazil.  Metaphysically speaking, these unique crystals are excellent to use for channelling work.  They are said to have been left by an advanced ancient civilisation known as the Lemurians.  They were imbued with a message of equality and unconditional love.  Unlike mentally based modern societies, Lemuria is said to have been a civilisation whose consciousness was centred upon spiritual and emotional dimensions.  The etched edges of these crystals are said to hold the Lemurian knowledge left for future generations to contemplate.  Hold one in your hand and gently rub the grooved surface while meditating.  They are excellent for chakra clearing & balancing, and for dream work.

A spectacular clear quartz crystal that comes predominantly from a particular mine in Brazil. It possesses unusual properties.  It is distinguished by horizontal striations and smooth sides.  Likewise, it is distinguished by the subtle wavelike etchings upon its faces and/or sides.  Beneath these surfaces is a clarity that is unique.

There is a certain watery or Undine quality that all these crystals from this location share.  Their origin is Lemuria.  They are crystals that were tempered in the sea.

The primary traditional use was as a precision healing tool.  They served as template crystals and as crystal healing crystals.  However, their primary function was for human, animal and plant healing –  it radiates all kinds of healing and protective energy.

It is a precision healing tool, to be used in all kinds of energy healing work.  In Lemuria sometimes its presence (being in the space where healing takes place) was more than enough while at other times it would be used in the actual process of healing.

It is generally believed that about 12 million years ago there existed an advanced civilisation somewhere between the American continent and Australia.  Some believe Lemuria preceded Atlantis; others believe they co-existed and that perhaps the Atlanteans conquered the Lemurians.  Whereas Atlantis was technologically advanced and warlike in nature, Lemuria was peaceful and highly developed spiritually.

Katrina Raphaell (author of the Crystal Trilogy and one of the most widely respected crystal teachers and healers) gathered with several others on Kauai to attune with six Lemurian seed crystals.  While doing so, they connected with a group of powerful non-physical beings who communicated the meaning of these crystals.

During the last days of Lemuria, it was decided to plant seed crystals programmed to transmit a message of oneness.  Having seeded the crystals, the Lemurians, it is believed, left this planet for other star systems.  Others went into inner earth (while maintaining telepathic connection with those in other parts of the galaxy), where they continue to care for the earth and the seed crystals now surfacing.

The crystals are thus connected to inner earth, the earth’s surface, and the stars, and serve as links to these various magnetic fields.  On the individual level, each seed crystal is energetically connected to all other seed crystals.

This connection is a living example of the message of the Lemurian seed crystals.  They teach us how to be both individuals and integral parts of the cosmic design, that all beings are equal.  They also help us how, as physical beings, to maintain our connection with our spiritual source.

Atlantis and Lemuria come together in this amazing crystal !
Lemurian Seed Crystals are known to open the heart and bring one to a deeper level of emotional and intuitive awareness.  Aqua Aura Quartz is said to activate the powers of the mind, including the psychic abilities.  In this crystal, we have the embodiment of the integrated mind and heart – both sides of human nature are activated and enhanced, without either diminishing the other.

Aqua Aura Quartz is known for stimulating the throat chakra, enhancing one’s ability to communicate.  It has a strong connection to water, so emotional awareness is also enhanced. To bring Aqua Aura to the Lemurian Seed Crystals is to focus on the understanding and communication of one’s emotions.  This takes place deeply within the self, but is also readily shared with one’s partner, family, friends and so forth, all in a marvellously balanced and appropriate way.

Aqua Aura Quartz is also known for opening the portals of Spirit, for enhancement of the inner journey.  Combined with the intuitive strength which comes from the Lemurian Seed formation, this crystal is an excellent tool for Light Body activation, channelling, work with prophecy, telepathy and other psychic abilities.

This entrancingly beautiful crystal combines the energetic properties of Clear Quartz and Pure Gold in addition to sharing many of the metaphysical characteristics of high quality Aquamarine.

Aqua Aura is highly stimulating to the throat chakra, enhancing one’s ability to communicate inner truth, at it also has a soothing and relaxing effect on the emotional body.

Aqua Aura Quartz can be used to soothe anger, cool feverishness, and release stress  It is strongly connected to the element of water, and it is therefore a stones for enhancing one’s access to the truth of the emotions and the portals of Spirit which are accessed through the emotions.

Aqua Aura Quartz can assist one in plumbing one’s emotional depths and heights while retaining inner peace.  It can also be an aid to those who wish to become conscious channels for spiritual wisdom, clearing and opening the pathways of inter dimensional communication.

Aqua Aura Quartz has a very high and intense vibration.  It has been used to activate the energy of other minerals and gemstones for healing work, and can be a potent stone when used in body layouts for activation of the Chakras.  It can be successfully applied to smooth and heal the Auric field, and to release negativity from one’s emotional, physical, intellectual and spiritual bodies.

Wearing Aqua Aura Quartz is said to help one to shine with one’s inner beauty, to attract wealth and success, to bring forth esoteric wisdom, to relieve depression & anxiety, and to assist in creating an aura of peace & well being in oneself and one’s surroundings.  It is a stone of spiritual elevation, which can serve to help raise the vibration of humanity.

Properties of Gold
Gold is considered by many cultures to be the master healer, stabiliser, harmoniser, balancer and grounder.  It is an excellent mineral for purification of the physical body.
It is a symbol of wealth, prosperity, love, generosity, power, illumination and sacredness.
It has been called Mineral Light.

The Buddha is often depicted in Gold to symbolise absolute perfection and enlightenment.

The energy of gold can be used to balance the energy fields and to assist one in the elimination of ego conflicts and feelings of futility.

Gold has been used in the development, purification, and balancing of the heart Chakra and for the amplification of thought-forms.  The purity of gold is said to help one to preserve higher thought forms for later retrieval.

Gold has also been used to open and to activate the third-eye and crown Chakras.

It has been said to attract honours, wealth, and happiness, to provide composure, to stabilise the emotional system, to alleviate tension and stress, and to amplify positive feelings.  It also assists one in attuning to nature and its healing forces.

Gold can clear negativity from the Chakras and the energy fields of the physical, emotional, intellectual, and spiritual bodies, while transferring the vitality of any mineral to the affected area.  Gold produces an energy which is both cooperative and receptive, allowing for extensive use with other gem stones – it attracts and maintains those qualities which are inherent within the additional stone.