Aquamarine is one of several common gemstones belonging to the Beryl mineral group.  The name is derived from the Latin phrase “water of the sea“, an accurate description of the gemstone’s colour, which ranges from a pale green to blue.  This colour is caused by trace amounts of iron that permeate the crystalline structure.  The blue variety is the most valuable and greenish stones are sometimes changed to the highly prized blue shade by heating them in an electric furnace to 450° C (842° F ).  Brazil is the main source of aquamarine gemstones, although other locations where the mineral occurs include Zimbabwe, South Africa, Namibia, and the United States.

Beryl crystals are some of the most well-known and prized gems that occur in nature, and include emerald, heliodor, and morganite, as well as aquamarine. Before 1925, gemstones were the primary use for Beryl.  Since then, Beryl has become an important source of the element beryllium, formerly known as glucinum, a metal with a variety of modern commercial uses, particularly in manufacturing metal alloys.

Enormous crystal masses, as large as 110 kilograms (243 pounds), have been discovered at some sites, and exquisite gems weighing two thousand carats or more have been cut from these formations.  Unlike emerald, Aquamarines are often completely flawless; an Aquamarine gemstone with a visible flaw is rarely seen.  However, the beautiful colour of an aquamarine may fade upon prolonged exposure to light.

The abundance of naturally occurring Aquamarine makes it affordable, more so than synthetic Aquamarines, which are expensive and difficult to manufacture.  Synthetic blue spinel, another mineral, is easy and inexpensive to produce, and it is often mistakenly sold as “Synthetic Aquamarine.” 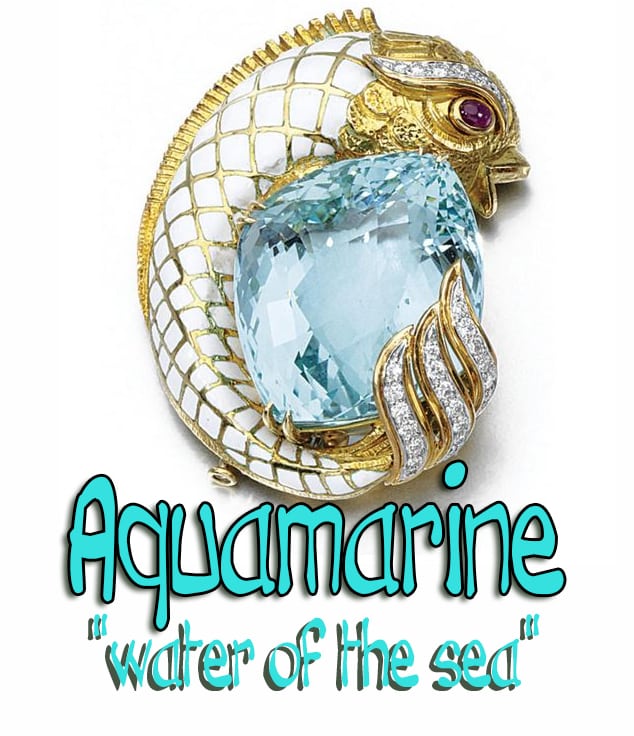 AQUAMARINE
‘Water of the Sea’

Legend and Lore
Aquamarine translates in Latin to “sea water” and the name is appropriate to the colour of this gemstone.  Aquamarine has become symbolic of safety at sea, and according to legend is a treasure of the mermaids.
(Photo – Aquamarine, Ruby & Diamond Brooch, David Webb – Photo c/o Sotheby’s)

Aquamarines vary in colour from deep blue to blue-green of different intensities, caused by traces of iron.  Naturally occurring deep blue stones are the most prized because they are rare and expensive.

The Aquamarine was believed to possess medicinal and healing powers, curing ailments of the stomach, liver, jaws and throat.  During the Middle Ages, it was believed to be an effective antidote against poison. Aquamarines were thought to be the source of power for soothsayers, who called it the “magic mirror“, and used it for telling fortunes and answering questions about the future.  It is said that Emperor Nero used it as an eyeglass 2,000 years ago, and much later, Aquamarines were used as glasses in Germany to correct short-sightedness.  In fact, the German name for eyeglasses today is “brille“, derived from the mineral Beryl.

Legend has it that wearing this stone brings hope and banishes fear.  The fascinating array of hues one can find evoke feelings of serenity, like the soothing sounds of the sea, or the gentle breezes of a blue sky.  In some lore, it is even worn to guarantee a happy and long lasting relationship.

“Select your attitude.  Positive thoughts activate happiness. Take the initiative – look for joy where you have not looked before.  You will be surprised what you find.”
“A breakthrough, a breakout of old ways of thinking, of doing of being.  You have the ability to see situations clearly.  The solutions are the next step beyond.”

BIRTHSTONES
Aquamarine is the birthstone for March and the zodiac sign Pisces.

Believed to bring luck to those who wear them, Birthstones originate from the Breastplate of Aaron (the brother of Moses) & the correlation of Gems with astrological signs in ancient India.  The breastplate was a ceremonial religious garment set with twelve gemstones that represented the twelve tribes of Israel and corresponded with the twelve signs of the zodiac and the twelve months of the year.  There are many different birthstone lists, however, and some argue that they should be assigned by astrological sign and not month.

For centuries, many believed that oceanic energy was captured within the delicate semblance of aquamarines.  When amulets made of this precious gem were worn, sailors believed that unmatched bravery would be instilled in their souls.  Made of beryl, aquamarine is a hard gem variety, making it a good choice for frequently worn jewellery, especially in earrings and pendants where its delicate colour and clarity can be predominately displayed.

There are a number of differing opinions as to what month matches what birthstone – see a Modern Birthstone Chart here.