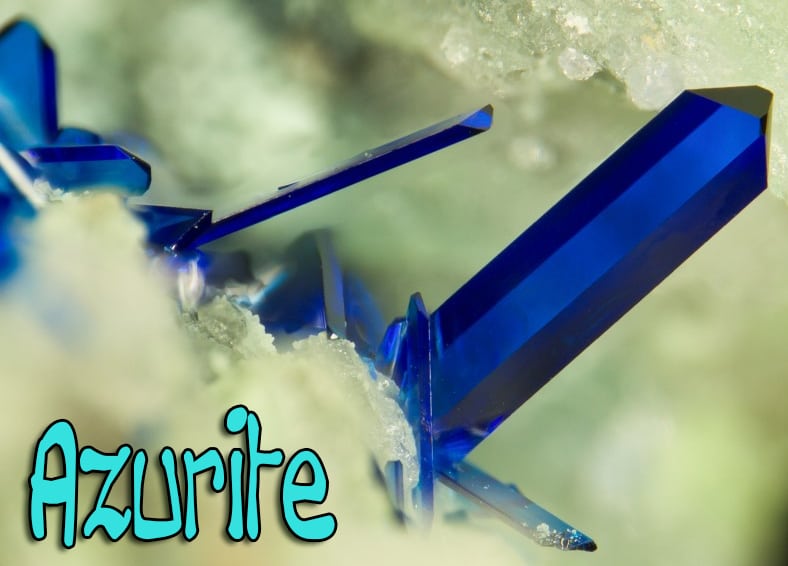 Azurite is also believed to clear and expand the mind, helping you to let go of programmed beliefs and to gain new perspectives. In addition it is said to stimulate memory, to encourage self-expression and to help reduce over-talking caused by nervousness.

Azurite is thought to be beneficial in overcoming phobias and for giving insight into the source of the phobias.

In healing, Azurite is said to help the throat, arthritis and joint problems. Azurite is also believed to have a special resonance with the mind, helping to heal mental stress and to alleviate worry and grief.

Azurite Crystals are rare and highly sought after.  The beautiful blue colour (from which Azurite got its name) is so deep that it is difficult for light to be refracted through the crystal.
Azurite is one of the most recognised species in the mineral kingdom.

Usually occurs in small crystals which are in prismatic, tabular, or equi-dimensional form. Crystals are sometime striated. Other forms are massive, crusty, radiating, fibrous, earthy, columnar, stalactitic, as thin needles, and in ball-like aggregates. Also occurs in dense groups of tabular or prismatic crystals. Azurite may also form as a pseudo morph over other minerals, retaining the original crystal shape of the mineral that it formed a pseudo morph over.
Transparency Opaque. Rarely translucent. 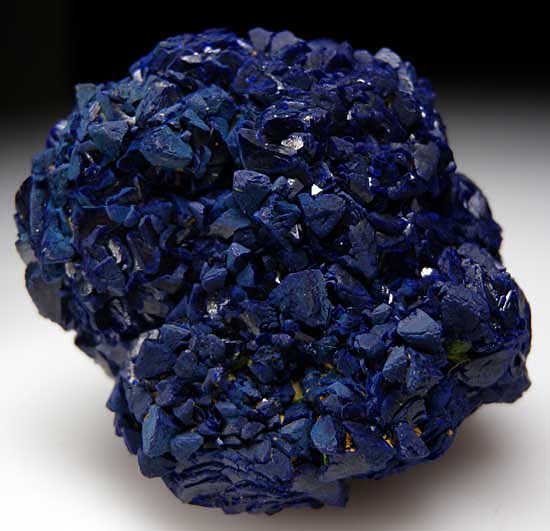 Large rounded nodule of beautifully bright blue Azurite. This one is unopened, though similar nodules have been cut open, in the same fashion as is done to a thunder egg or geode, to reveal brilliant azurite crystals.
This beautiful Nodular specimen is a complete Azurite “flower” – sometimes referred to as a rosette.  It consists of an aggregate of radiating bladed crystals that emanate from a central point or line.  It has a rather dull pearly lustre.  The rosette is opaque, showing only faintly dim translucence through the exposed blades on its edges. This Azurite rosette is not affixed to any host rock.  It is made up of short, bladed crystals that seem to have a pearly lustre on their visible faces, and are only dimly translucent at best.  The crystals show a very uniform, symmetrical arrangement in the cluster.  There are also tiny, globules of dull pale bluish-green, most likely Malachite, on one section of the cluster, peeping from beneath the Azurite crystals. 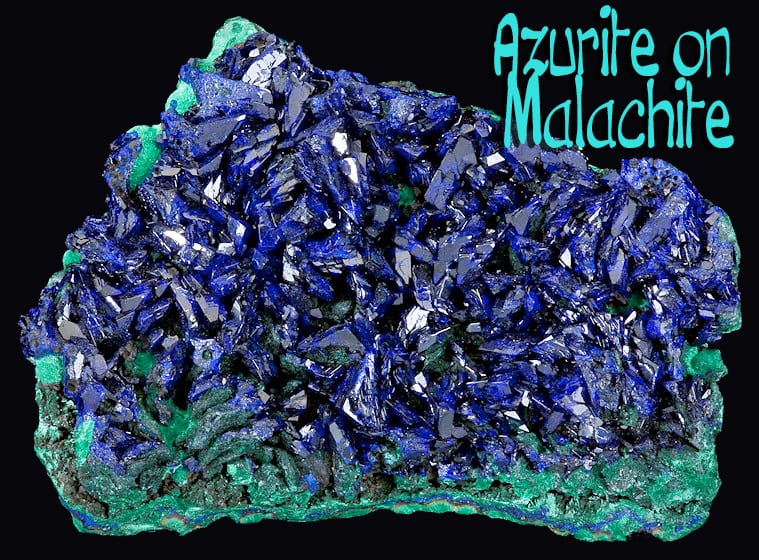 Azurite usually occurs with green Malachite, which may form green stains or specks on Azurite crystals or aggregates. The two minerals sometimes occur ad-mixed or banded together, forming what is called ‘Azure-malachite’ in the gem and mineral trades. A rarer Azurite mixture, known as ‘Bluebird’, is Azurite mixed with dark red Cuprite. Azurite, ‘Azure-malachite’, and ‘Bluebird’ all have gem uses.

In some localities, the Azurite undergoes a chemical change and loses some hydroxyl, altering the Azurite to Malachite, but retaining the crystal shape of the original Azurite. Sometimes, only part of the Azurite is altered to Malachite, while the other part remains as Azurite. Such specimens are green on one end and blue on the other.

Azurite is a very popular mineral because of its unparalleled colour, a deep blue called ‘azure’, hence its name. Azure is derived from the Arabic / Persian *lazhward* – word for blue. The colour is due to the presence of copper (a strong colouring agent), and the way the copper chemically combines with the carbonate groups (CO3) and hydroxyls (OH). Azurite has been used as a dye for paints and fabrics for aeons. Unfortunately, at times its colour is too deep and larger crystals can appear black. Small crystals and crusts show the lighter azure colour well. Azurite is often associated with its colourful close cousin, malachite.

Azurite is used in jewellery and for dyes . It is also an unimportant ore of copper, although its significance has been more impressive in the past. It is still considered a minor ore of copper; mostly because it is found associated with other more valuable copper ores. Fine crystal clusters, nodular specimens, and interesting and beautiful combinations with malachite are important pieces in anyone’s mineral collection. The magnificent colour of azurite is worth mentioning again as it truly is a one-of-a-kind in the mineral world. Azurite is one of those classic minerals.

Azurite is known as a *Stone of Heaven*.  It stimulates the pursuit of the heavenly self, providing for guidance via the third-eye and allowing for precise verbalisation of psychic experiences.  It provides for insight into all areas of one’s life.  It enhances creative ability and helps to eliminate indecision and worries.
The form of the Azurite Nodule is excellent for stimulation of the third-eye and the intuitive and psychic selves.  It can also be used to enable the focusing of the intuitive self, via the third-eye, at the etheric level, to induce to memory the portions of one’s life or character which require attention.
In the Native American Indian history, Azurite has been used as a sacred stone.  The Nodule and Crystal forms have been used to facilitate contact with one’s spiritual Indian Guide;  to allow one to both feel the presence and to understand the message.
The Mayans used the stone to stimulate and inspire the actualisation of the psychic and mystic self and to facilitate the transfer of information, knowledge and wisdom, via thought.
During radionic analysis {where one holds a sample specimen and places a sample on the witness}, or when used as a pendulum, the energy of the tone permeates the energy of the user and points to the problem(s) involved and/or to the answers required.
In meditation, it provides for relaxation and for the easy entry to the void of the state of *no-mind*.  It allows one to travel deep within the inner being and to maintain the depth, while integrating the myriad of visual images which are made available.
While in the non-meditative state, it further combines the abilities of relaxation with the stimulus toward awareness, precision and global thought.

Vibrates to the number 1

PHYSICAL CHARACTERISTICS:
Colour is azure, deep blue or pale blue if found in small crystals or crusts.
Lustre is vitreous to dull depending on habit.
Transparency: Transparent if in thin crystals, otherwise translucent to opaque.
Crystal System is monoclinic; 2/m.
Crystal Habits crystals are irregular blades with wedge shaped terminations. Also, aggregate crusts and radiating, botryoidal, nodular and earthy masses.
Cleavage is good in one direction and fair in another.
Fracture is conchoidal and brittle.
Hardness is 3.5-4.
Specific Gravity is 3.7+ (heavier than average).
Streak is blue.
Associated Minerals are numerous and include malachite limonite, calcite, cerussite, quartz, chalcopyrite ………. and many more !
Notable Occurrences include numerous localities worldwide, but special localities produce some outstanding specimens especially from Lasal, Utah; Bisbee, Arizona and New Mexico, USA; Mexico; Tsumeb, Namibia; Shaba, Congo; Toussit, Morocco; Australia and in many locations in Europe.
Best Field Indicators are colour, softness, crystal habits and associations.
Two prominent locations are:
– Red Dome Gold Mine, Chillagoe, Queensland, Australia.  Red Dome Mine produced a sporadic burst of Azurite and other carbonates during 1995-6.  The mine is now closed and no more specimens will ever be collected.
– Locality: Tsumeb District, Namibia